When Fawn entered kindergarten in Thunder Bay, Ontario, she spoke only Mandarin, and barely a word of English. The next year, she started French Immersion. She has since lived all over the country, including all three of Canada’s northern territories, and has performed in exotic locations from Iqaluit to São Paulo. Fawn embodies Canada’s diversity with her mixed cultural roots of Chinese, French, and German, singing in her three ancestral languages as well as English.

Raised on folk, classical, and musical theatre, Fawn was a latecomer to jazz, but the bug bit her hard. She quickly garnered accolades. Tim Tamashiro (former host of CBC Radio’s national jazz program Tonic) named Fawn “one of Canada’s top swingers”. In 2014, Fawn won the Julian Award of Excellence for Emerging Jazz Artists.

The end of her marriage in 2015 spurred a period of deep reflection that changed the direction of her music. She grappled with the forces that had shaped her life decisions: perfectionism, Catholicism, and anxiety, among others. #MeToo further strengthened her sense of responsibility to give voice to real human stories. Music plays a crucial role in shaping society, and she felt compelled to write music about issues that matter.

“The Yukon jazz singer makes the minimalism work on her second album ‘Pairings’. By limiting herself to very few backing players — and in most cases, just a single supporting musician — she creates a lot of open room for her sublime singing and her collaborators’ superb sense of swing. I’d like to suggest one more pairing . . . all jazz lovers’ ears and this wonderful recording.”
— Mark Rheaume, CBC Radio 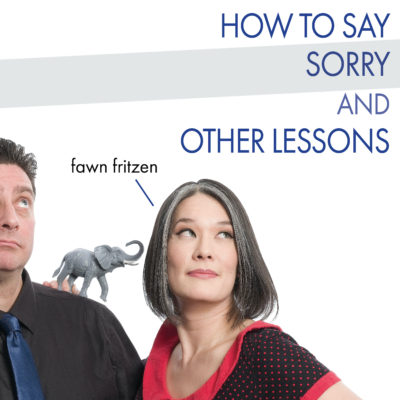 How to Say Sorry and Other Lessons